Listening to music has never been easy as now there are hundreds if not thousands of ways to listen to music these days. Music can be listened on the radio, the songs can be streamed, there are music videos to enjoy, some old methods like listening to vinyl and more. Radio is now not much popular as it used to be but sometimes when people want to just hit the play button without managing the playlists, playing order of songs or more then Radio comes in handy for freestyle music listening. To discover new music, radio is still being used so here are few of the best radio apps for Android users present in todays market.

Price: Free but has advertisements AccuRadio is not a popular radio application though it is good and does what it is made for. This app alone contains 1000 radio channels to tune and every channel can be customized by the listener and allows unlimited skips, has a rating system to see best songs and allows listeners to ban artists and songs from the stations they are listening to in the end making it an app with the songs that the user prefers. Along with pros it has some cons too that include no support for Chromecast and servers sometime have issues and bugs but beside it they give a great experience. 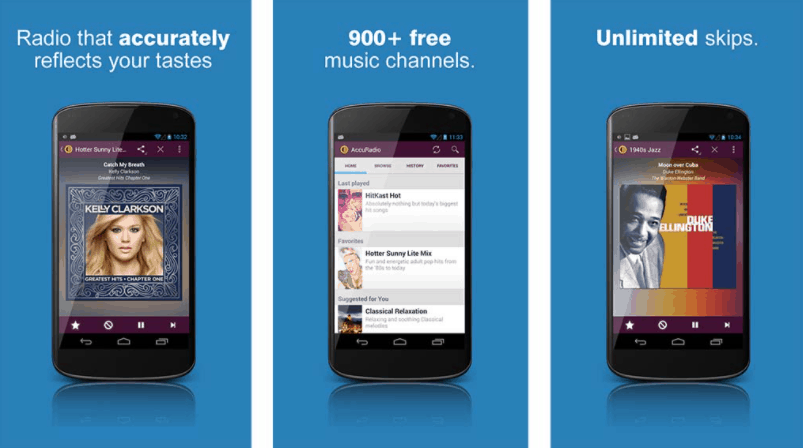 Price: Free or $5.99-$12.99 per month iHeartRadio is popular among the searches for Radio apps and has a impressively large range of stations to select from and listen to including the FM stations as well and iHeartRadio station mixes too. All the playlists are designed to fit the moods of the listener as they have around all the genre, seasonal playlists such as specific for Halloween or Christmas and is a complete free of cost application getting support through in app ads. This application also supports Chromecast and Android Wear and for a way better experience the users can pay $5.99 per month and to access all the additional features, get on demand songs and free of advertisements application the users are charged with $12.99 per month. 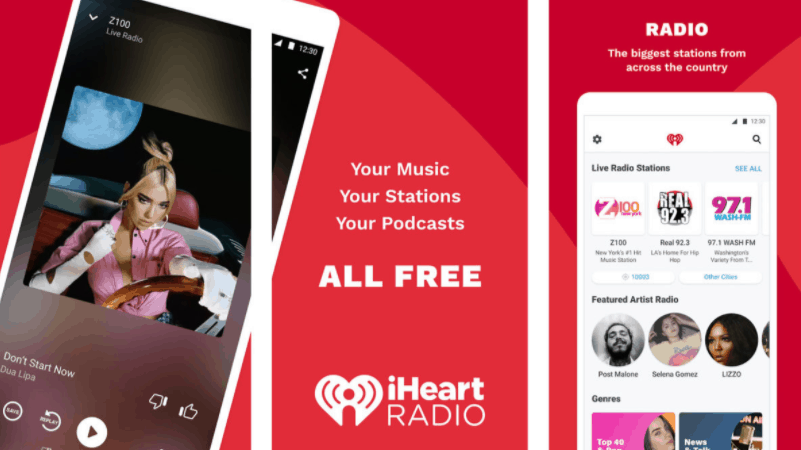 Price: Free or $3.49 myTyner is another competitive option in the market of virtual mobile phone android radios for people who like traditional radio stations as this radio app streams over 50,000 radio stations covering the content of 200 countries and territories. myTuner also supports many types of talks and music radios, podcasts and sleep timers and alarm functions are also a part of this application. Android Auto, Sonos, streaming sticks and much more functionalities are supported through this app and very less complains about occasional streaming drop is brought into notice by few users and it is a free app if Google Play Pass is used.

Price: Free or $4.99 to $9.99 per month Pandora is one of the most popular radio streaming app in the US and for its near areas and allows the users to stream random music that is top notch and popular having gained success over the years. This app does not focus on system specified stations rather allows the users to create their own stations by selecting their own favorite artists, songs as well as music genre. There are system created playlists to stream but the people listening to songs on Pandora creates their own songs. The users can get ad free version of the app for $4.99 per month and all additional on demand song playing and other features can be utilized for a full $9.99 per month for the Pandora Premium. 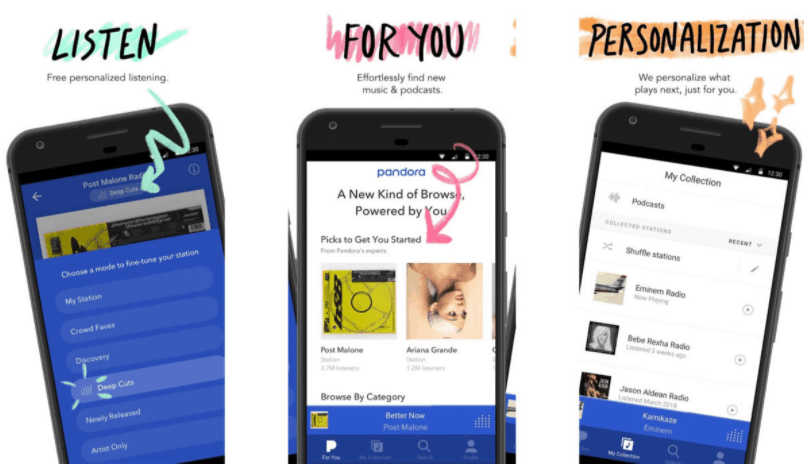 Price: Free or $4.99 per year A most popular and traditional radio app is non other than Radio Online which features a variety of radio stations that contains all types of contents, genre of songs that are ready to be streamed when the user want to. This app includes FM stations as well as Internet hosted radio too supporting online streaming and if the user goes pro they can get more features such as live radio recordings, sleep timers and more functionalities. It is really an effective application that does what it is made for and is a really good option for people wanting simple radio with extra features. 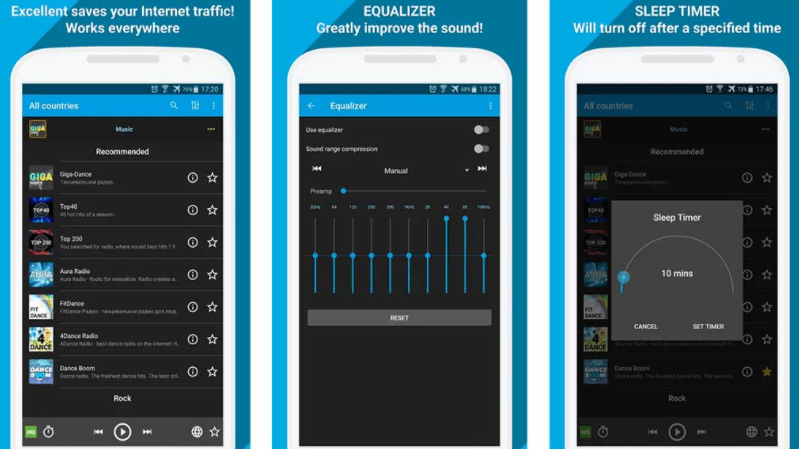 Price: Free app or $10.99 to $19.99 per month SiriusXM is an satellite radio that set the origin of satellite radios and removed the standards of AM and FM radio services and holds more than 150 channels which include music channels, sport channels, Howard Stern Show and more. Depending on the content the user wants to listen this app comes with three different subscription plans to select from and is improving its stability and other problems gradually. There are still problems available but the cross platform features minimizes this flaw as many cars have SiriusXM built in which means no need to use Bluetooth or any other type of connection in the modern cars. 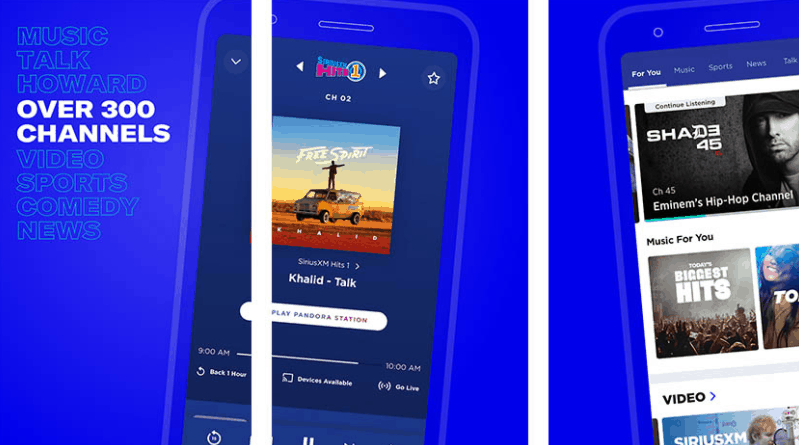 Price: Free or $9.99 to $14.99 per month Spotify is also a music streaming application that has started to focus on radio style streaming over these last few years and along with it this app has genres, moods and artistic specific radio stations to stream online. This app also generates unique playlists that include Worldwide top 50 songs and more containing songs that are not too mainstream. The free version has all the songs but not complete control of the app while the $9.99 subscription cost removes the ads and allows full control of the app to its users. Apple Music radio service is also a great service and includes most of the podcasts and is goof for talk radios too. 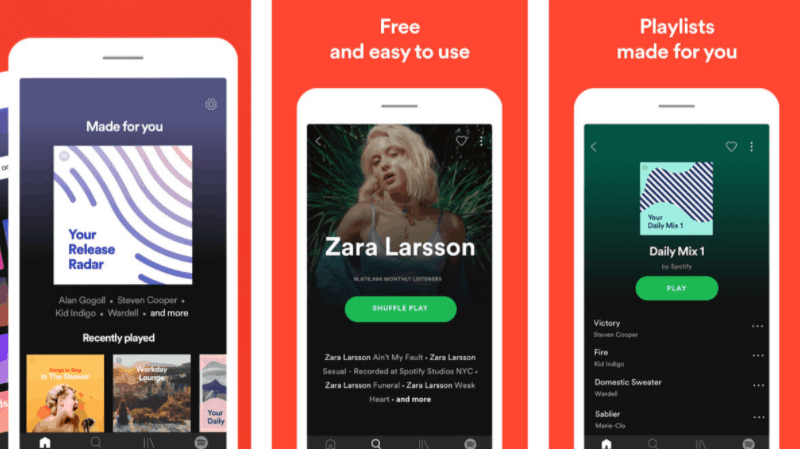 Price: Free or $9.99 per month TuneIn Radio has a variety of radio stations containing all kinds of music types, genre, sports, comedy, talk radio, news and a huge range of different types of medias. The free version of this application includes 100,000 stations in total and a huge rage of around several million podcasts. If the users buy the premium version they can also gain access to live NFL, MLB and Barclays Premiere League games, removed ads and audiobooks and the price may vary depending on the region the listeners live in. Overall, it is a great radio application and is great for music as well as other interests to listen over radio. 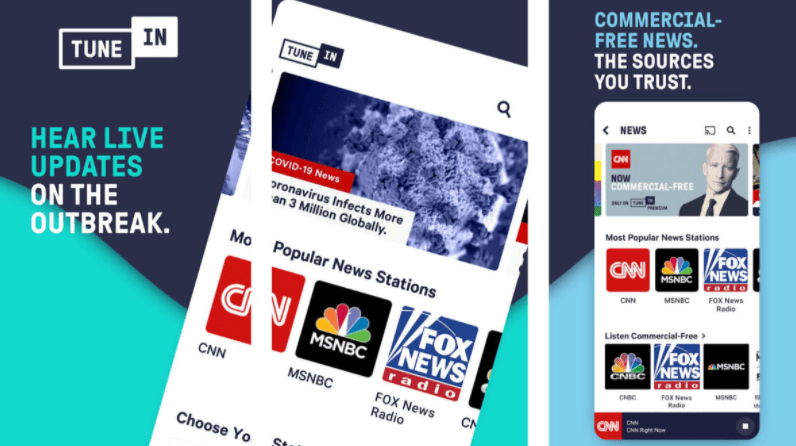 Price: Free XiliaLive Internet Radio is not as common application as the other radio applications though it has a complete set of features. This application supports itself by holding 50,000 live radio stations that are more than enough for people and the best part is the organizational feature allowing the listeners to save their favorite stations and also includes themes, features for data management as well as addition of users own radio station URL link are included along with Bluetooth and equalizer functionalities. This application is free for all but few features and an advertisement free version requires some charges.

Price: Free with ads (most of the time) Internet waves and radio waves both have taken hold of the AM and FM radio stations and plays them over the internet and broadcasts and most of these radio stations are dedicated applications where the listeners can stream their songs and more materials for 24/7 and these also allows them to engage with radio stations through social media, giveaway information, podcasts, promotions and many other ways in which the stations might be running. These apps are improving over the years but their start was not good but these are worth a try if they are looking to listen to a good radio station. 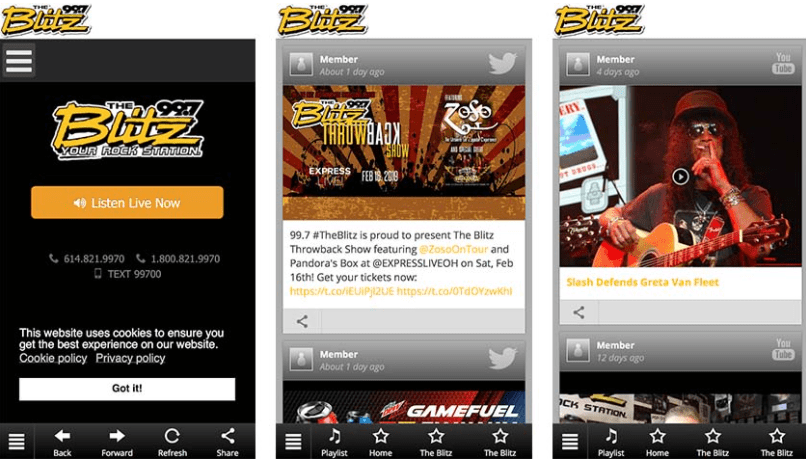